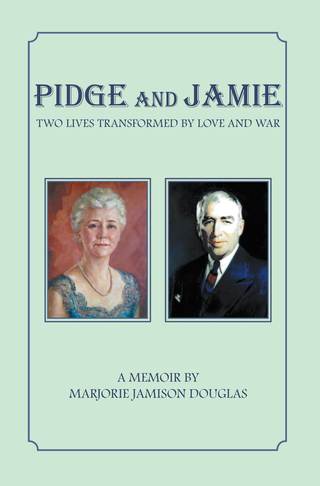 Inspiration for Pidge and Jamie

I grew up hearing stories of my mother's childhood and her experiences in the war zone of France during the first  World War, still known in Europe as The Great War.  I knew my parents had written to each other almost every day in the years they were separated during the war, but I had no idea their letters still existed. One day, on a visit to my mother, I found her starting to burn all these letters. She told me they were very personal love letters and she was burning them because she didn't ever want anyone to read them. I pled with her not to destroy them and finally convinced her to stop by promising to read and edit out all the personal parts, and never let anyone else see the originals. I just wanted to save the history. By reading them I was able to get a detailed picture of that part of my parents lives, and they are now a major part of this book.

My mother had given me over 1200 letters in the original envelopes. They were tied up in many bundles and in no particular order, so it took me several years to colate, read and edit all of them. When I finished, I put them in archival boxes and wondered what next to do with them. Almost everyone I told about these letters said I should write a book. It seemed like a very daunting project and I wasn't sure I could even do it. However, at age 89, having been diagnosed with macular degeneration, I decided if I was ever going to try writing a book, I should do it while I still could.

When starting the book my intention was to write just about the war years, based on their letters. However, as my work continued, I decided to include a history of their entire lives. Thus, this memoir covers my parent's lives from birth to death, in three sections. The first is their Victorian childhood, their college years, my mother's travels and my father's Army service. The second is the war years, which greatly changed their lives, and the third is devoted to the remainder of their lives and their amazing civic work.  "Pidge and Jamie" is the result.